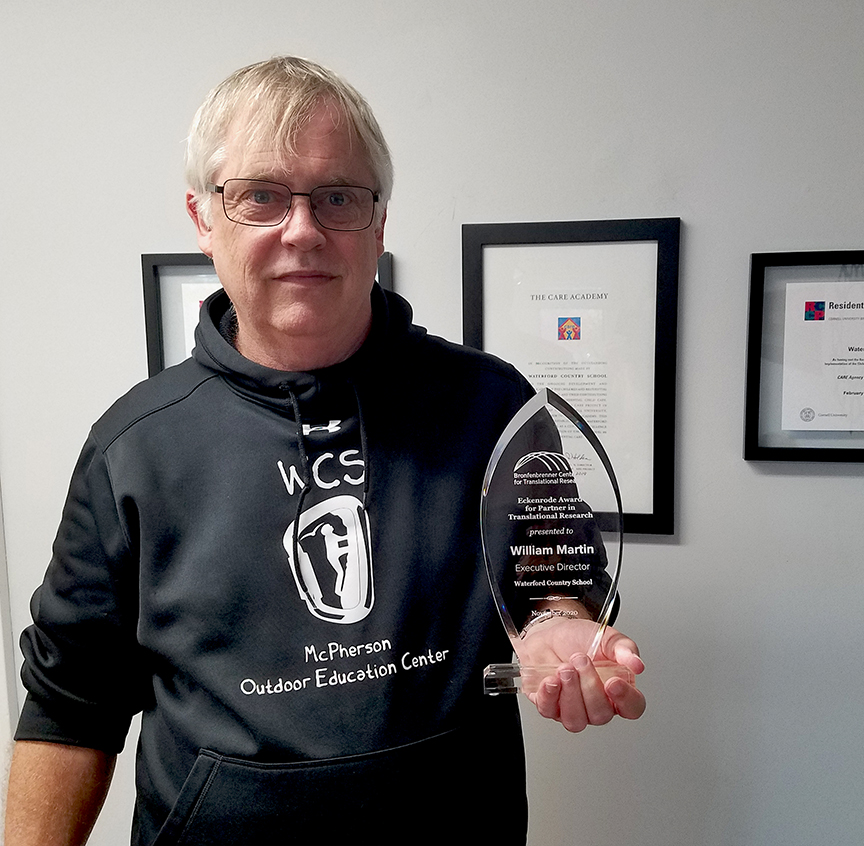 In the invitation to the virtual presentation, they announced: This award is dedicated to honoring individuals and organizations who have played a vital partnership role with Cornell researchers to expand, strengthen, and speed connections between research, policy and practice in service of human development and wellbeing. It is named after John Eckenrode in recognition of John’s tireless personal and professional dedication to assuring that vulnerable youth and families benefit from high quality research partnerships.

This year’s awardee is Bill Martin, Executive Director of Waterford Country School, a nonprofit human service agency providing a range of services including residential treatment, emergency shelters, therapeutic boarding, foster care, special education and outpatient services. Under Bill’s leadership, Waterford Country School has partnered with the Residential Child Care Project to evaluate and further develop the RCCP’s CARE program model. They have been a critical partner in building the evidence base that resulted in CARE being listed on the California Evidence-base Clearinghouse through identifying areas for research and collaborating with the RCCP research team to examine the effects of CARE on the use of high risk interventions and psychometric medication on children in their care. CARE has been implemented in more than 50 organizations in five countries and is making a difference in the lives of children and families as well as the staff and agencies that work with them.

As noted by The Day newspaper, over 80 individuals tuned in virtually for the award presentation. Numerous Waterford Country School staff members, as well as Cornell University partners, shared their admiration for Bill Martin and his stewardship.

“Thirteen years ago, I received a call from Bill … I was so impressed, I loved how he was advocating for his staff, his organization and the young people there, and wanted to make sure they got the very best care from the programs they implemented,” Martha Holden said. “Bill loaded up his van with a group of his leaders and drove to Cornell, and we had a meeting that was the beginning of this incredible partnership.”

Bill Martin added, “This great award is a product of over 10 years of hard work by both Waterford Country School and Cornell University and the great growth we have realized in that time.”

The researchers at Cornell noted how hard it is to do their work without the inspiration of watching it be applied in a real setting. For the researchers at the Residential Child Care Project, WCS was a mirror to reflect how their theories were applied and kept them grounded in reality. The collaboration between Cornell and WCS, they said, embodies what great research is supposed to be. Sue Sullivan, the newly retired Medical Director of WCS mentioned how “Cornell and the CARE model became the wind under our sail. We wanted to be excellent at what we did…when we found the CARE Model we had the data and the drive to make us even better.”

Many people shared how Executive Director, Bill Martin embodied the CARE principles as a leader at the agency. “He’s open to people’s feedback, he never says ‘no’, he’s always willing to take a risk, he collaborates with everyone, he’s practical, he truly cares.

Through working with Cornell, Bill Martin said “People all over the world had a stake in Waterford Country School because of our relationship with the child care project.” Waterford Country School, in turn, has helped change the lives of troubled youths elsewhere by inviting visitors to see the CARE program in person, as well as documenting its progress by carefully recording data and being part of scientific studies.

What a great moment for Waterford Country School and the work it has collectively done in the last decade to become even better at caring for kids. Although he’s never comfortable with the attention, Bill Martin is deserving of such a prestigious award and the Staff and Board of Waterford Country School have been so proud to serve under his leadership.