Reliance Health announced this week that their Board of Directors has appointed Carrie Dyer as Chief Executive Officer upon current CEO, David Burnett’s retirement. Burnett, who has been the organization’s CEO for nearly 41 years, announce plans to retire by the end of 2019 in a press release last month.

Dyer, who has worked for the agency since 1994, has served as Reliance Health’s Chief Operating Officer for the past 12 years. “For some time now, Carrie has had more ability than I to handle the complexities of today’s world. Wisdom is important, but truth be known, Carrie may have more of that than I do now” said Burnett when asked about Dyer’s appointment.

When Dyer started with Reliance Health, she was hired for a program that was being developed to support individuals who were moving out of Norwich Hospital. While waiting for the program to gain funding she temporarily worked with adults living with developmental disabilities, coupled with mental health barriers. When the funding fell through, Dyer was transferred to a service coordination role where she provided support to individuals who were on parole, probation, supervised diversionary, transitional supervision status or who were under the auspices of the Psychiatric Security Review Board. After 3 years of providing direct care services Dyer became the program supervisor.

Dyer obtained her master’s in organizational management from Eastern Connecticut State University and was promoted to Service Director in 2002, overseeing the agency’s service coordination programs. During a period of rapid growth for Reliance Health Dyer transitioned to the role of Program Administrator, before becoming the agency’s Chief Operating Officer in 2007. “When I started, we only had one residential program and about 40 employees. Now we’re serving all of Eastern Connecticut through 11 residential homes, nearly 30 community-based programs and over 250 staff. To grow along with the agency has been a wonderful experience. I never could have imagined this path for myself but am grateful for the support and encouragement I have received to get here” says Dyer.

In her role as Chief Operating Officer, Dyer has been known to work tirelessly to ensure that despite funding losses, those in need maintain access to quality services while staff remain employed. Her reputation is that of a strong advocate who consistently pushes back when the system imposes restrictions on Reliance Health’s ability to provide care. Her focus has been to pursue opportunities to enhance service delivery, while promoting staff’s ability to be empowered.

Dyer has demonstrated a strong commitment, not only to the staff and service recipients of Reliance Health, but to the community as a whole. In addition to working with regional social service organizations to advocate for mental health services, she partners with community members and local businesses to engage in collaborative ventures that promote whole-body wellness and community development. Norwich Creates, for which Dyer is the Chair, highlights her inventive ability to bring various groups together to produce creative energies in and around Norwich.  Since connecting Reliance Health with Norwich First Fridays Dyer has coordinated each gallery show at the agency, securing artists up to a year in advance. Dyer’s efforts with the gallery have attributed to Reliance Health’s growing relationship with the community, promoting education and connection between those served, artists, and gallery visitors, while simultaneously encouraging the evolution of downtown Norwich.

In conjunction with Norwich Creates, Dyer collaborates with a variety of community members to ensure Reliance Health programs are successful in their efforts to engage in community focused projects. Her involvement with Arts in Health, a Southeastern Connecticut Cultural Coalition group, led to the Common Thread art collaborative in 2018 which brought 4 nonprofit organizations together to work on a collective art project which was displayed at the Groton New London Airport in addition to the Reliance Health gallery.

Dyer has been a leader in Reliance’s Health’s movement toward whole-body wellness while promoting community development. “I feel like there was a pivotal point when we started sharing our passion for what we do with the community. What we do here is build relationships, so it just makes sense to build relationships with the residents and businesses around us while supporting their growth” said Dyer.

Burnett has not yet announced a date when he plans to retire but is confident that the agency will be left in good hands, “I am very confident in Carrie’s desire and ability to lead Reliance Health in a manner which upholds our culture, employees and those we serve. I look forward to supporting Carrie as our employees have supported me over the last 41 years.” 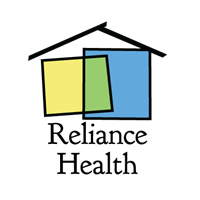