Two Sailors assigned to Naval Submarine Support Facility (NSSF) onboard Naval Submarine Base (SUBASE) New London were recognized as Service Persons of the Month (SPOM) for their contributions to both their command and the local community, March 17.

The recognition ceremony, held virtually, by members of the Chamber of Commerce of Eastern Connecticut (the Chamber) and the Norwich Rotary Club, had a unique twist: the Sailor recipients were receiving their awards a full year apart. Sonar Technician (Submarine) 1st Class Zachary J. Pennington of Whiteland, Indiana, was selected as the March 2020 SPOM, but due to the COVID-19 pandemic his ceremony was put on hold. Sonar Technician (Submarine) 1st Class Nicholas R. McCoic of Hillsboro, Wisconsin, was honored as SPOM for March 2021.

As Pennington received his 2020 award, his supervisor noted a positive outcome of the past, difficult year: Pennington’s promotion. Last year’s award documents listed him as STS2.

“He has gained a rank since then,” said Chief Sonar Technician (Submarine) Jim Bass, the 76G leading chief petty officer at NSSF. “STS1 [Pennington] runs all the production for 67G ensuring 25 individuals are able to repair the 17 submarines on the pier. And with the Gales Ferry Volunteer Fire Company, he has responded to anything from an actual fire to accidents and medical emergencies. He was even recognized by the fire department in regard to a late stage pregnancy that happened in October 2019.”

McCoic, March 2021’s SPOM, was also praised for his leadership skills overseeing a shop that supports the submarines homeported at the base. Additionally, he was lauded as his command’s community service volunteer coordinator.

“Petty Officer McCoic has earned his command’s utmost confidence,” said Clay. “He’s coordinated support to multiple community events, including the Walk to End Homelessness, the Groton and Ledyard Back-to-School Bash, the Windham Airport Open House, and the Walk to End Alzheimer’s. No matter how tough the job, the results always come out the same: outstanding!”

McCoic and Pennington expressed their gratitude for the recognition and thanked the Chamber and Rotary members.

“I really appreciate this nomination,” said McCoic. “It’s an honor to serve in the community, and I love being here.”

Pennington said he was also proud to be of service to his community.
“My family and I are honored,” said Pennington. “It’s great to be able to serve the country and also the community of Gales Ferry.” He noted that since COVID-19, he hasn’t been able to participate with the fire department; but once he is able, he looks forward to returning.
Both Sailors received certificates and gift cards, and the Norwich Rotary made a $100 donation to the charity of McCoic’s choice.

The SPOM Program is organized by the Chamber and local service clubs such as the Norwich Rotary to honor local military personnel of all branches who not only excel in their regular duties, but also go above and beyond in their contributions to their community. 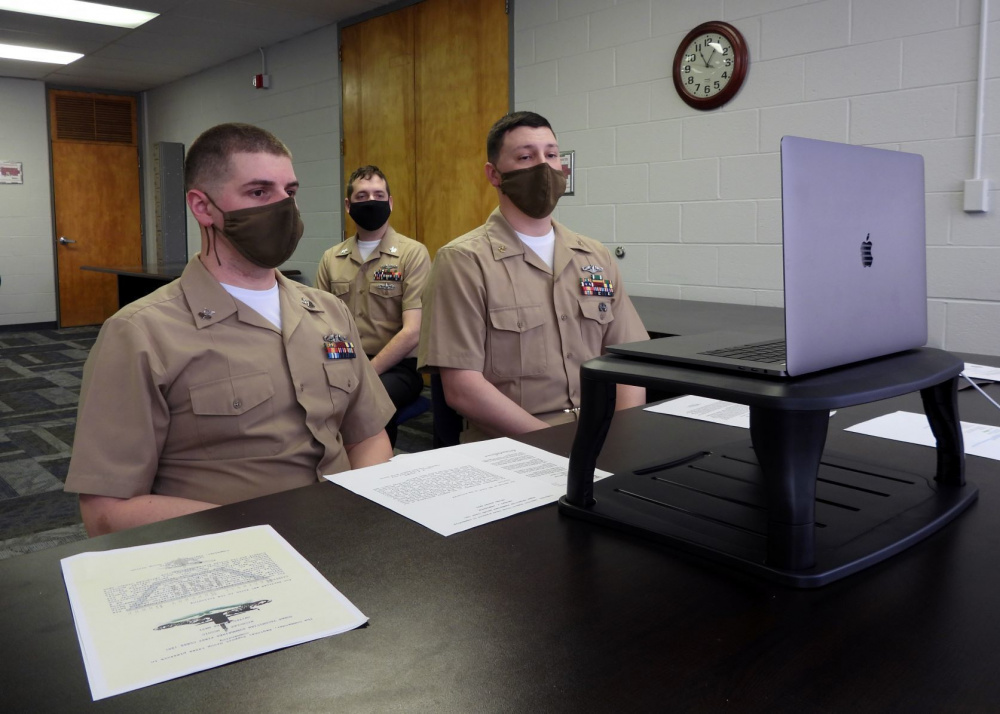 210317-N-AY957-008 GROTON, Conn. (Mar. 17, 2021) Sonar Technician (Submarines) 1st Class Zachary Pennington (left) and Sonar Technician (Submarines) 1st Class Nicholas McCoic (center) participate in the March 2020 and March 2021 Service Person of the Month (SPOM) virtual award ceremony while Chief Sonar Technician Jim Bass looks on. The SPOM Program is organized by the Chamber and service clubs such as the Norwich Rotary to honor local military personnel of all branches who not only excel in their regular duties, but also go above and beyond in their contributions to their community. (U.S. Navy photo by Damage Controlman 3rd Class Christian Bianchi Santiago/Released)