Wireless Zone, the nation’s largest wireless retail franchise offering exclusive Verizon products and services, is partnering with The Cellular Connection (TCC) and Culture of Good to donate backpacks full of school supplies to children in need across Eastern CT through the brand’s Sixth annual School Rocks Backpack Giveaway. The giveaway, taking place at participating Wireless Zone locations nationwide, is bigger than ever before with more than 250,000 backpacks full of school supplies expected to be delivered in 2019. Since 2013, Wireless Zone and TCC have donated more than 700,000 backpacks filled with school supplies to ensure children are well prepared for the start of the school year.

“We're very excited to once again participate in this great endeavor,” said Scott Gladstone partner to the local Wireless Zone’s below, “for 25 years we’ve been entrenched in our local communities giving back wherever we can.  Last year was an outstanding success and this year with the help of our generous employees and customers we are able to double the amount of back packs ensuring that as many children as possible have access to the tools they need to be successful in school.”

More than 1,300 participating Wireless Zone and TCC stores across the U.S. are inviting local families and their children to visit these select locations on Sunday, July 21 between 1 p.m. and 4 p.m. to pick up a backpack filled with various school supplies, including pencils, paper, a pencil box, folders and glue. One backpack per child present will be given away on a first-come, first-served basis while supplies last.

Participating Wireless Zone store(s) in Groton, New London, North Windham, Putnam and Dayville, Glastonbury and Westerly RI. Each participating store will donate 400 backpacks. In addition to this the stores will be offering a fun event for the whole family including Free food from local venders, Touch a truck from local fire departments, Police and ambulance, Bouncy houses, face painting, Princess meet and greet and additional entertainers.

“Wireless Zone is extremely proud to be part of such an amazing movement, and we couldn’t be more excited to partner with TCC on an initiative like the backpack giveaway that aligns so well with our core values,” said Dave Staszewski, Executive Vice President of Wireless Zone. “Since 2003, our franchisees have committed to giving back through the Wireless Zone Foundation for Giving, which provides grants to a wide variety of impactful organizations. We are thrilled to add Culture of Good as another partner in creating a lasting impact in the communities we serve.”

In 2015, the National Retail Federation predicted the average person with children in grades K-12 would spend $122.13 on school supplies such as notebooks, pencils and backpacks. With more than 16 million children in the U.S. living in poverty, Wireless Zone and TCC are working to alleviate the rising costs of school supplies through this annual program.

Supporters of the School Rocks Backpack Giveaway are encouraged to use the hashtag #cultureofgood on Instagram and Twitter to help spread the word.

ABOUT WIRELESS ZONE
Founded in 1988 as "The Car Phone Store", the Wireless Zone® system has become the nation's largest wireless retail franchisor and was ranked the No. 1 franchise in its category by Entrepreneur magazine. All stores are independently owned and operated, exclusively offering Verizon Wireless products and services. The Wireless Zone® system has been honored with Verizon's “Best Customer Service” award each consecutive year since 2011 and is franchised and operated by Wireless Zone, LLC. For more information, visit www.wirelesszone.com. 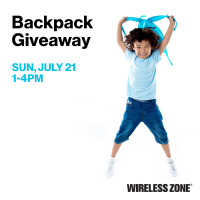