Summer is Still in Full Swing with Star-Studded Performances by Award-Winning Comedians, Musicians and more!

Mashantucket, CT – Ready to turn up the heat on the final days of summer? Foxwoods® Resort Casino, the Northeast’s premier resort destination, is keeping the season alive with the most sought-after acts in entertainment! GRAMMY Award-winning musicians, acclaimed stand-up comedians, celebrated tribute artists and the hottest exports from down under will perform at the Grand and Fox Theaters keeping audiences charged with excitement. Cool down poolside at Liquid Sundays pool party, then head to SHRINE nightclub for some after-hours fun where guest DJs will be mixing their original tracks.

Legends in Concert
WHEN: August 1 through September 3, show times vary
WHERE: Fox Theater

Tickets may be purchased online at www.Foxwoods.com/Liquid-Sundays/. For daybed and cabana pricing and reservations, please call 860-312-8232.
* * *
About Foxwoods Resort Casino
25 Years Proud: Since 1992, Foxwoods Resort Casino has offered guests The Wonder Of It All as the premier resort destination in the Northeast.  As the largest resort casino in North America, Foxwoods offers a vast array of gaming in seven casinos; AAA Four-Diamond hotels, restaurants from gourmet to quick service, world-renowned spas, award-winning golf, state-of-the-art theaters, and exclusive retailers. Foxwoods is owned and operated by the Mashantucket Pequot Tribal Nation and was the first full-service casino built on tribal land, pioneering a nationwide movement that now includes more than 400 gaming properties owned and operated by over 200 tribes across the U.S. For more information on Foxwoods and the property’s 25th anniversary celebrations, visit foxwoods.com. 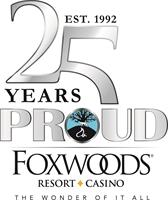