Mary Lenzini is Eastern CT's Citizen of the Year!

Eastern CT – The Chamber of Commerce of Eastern CT is pleased to announce that Mary Lenzini, President of the Visiting Nurse Association of Southeastern CT (VNASC), will be honored as eastern CT’s 67th Citizen of the Year. The Chamber will recognize her at a dinner celebration on May 31 at Mystic Marriott Hotel & Spa in Groton.

The Citizen of the Year award is presented annually by the Chamber to an individual or individuals who have gone above and beyond in furthering the business and civic communities of eastern CT. Candidates must have performed the services for which they are nominated in the spirit of altruism beyond the limits of his or her job description.

Mary Lenzini exhibits the qualities sought in a Citizen of the Year candidate. As president of the VNASC, Lenzini manages the Association’s home health care, school health, and community wellness services to thousands of eastern CT residents, including new mothers, the elderly, and the homeless. She oversees the VNASC’s staff of 234 and ensures that the entire community’s healthcare needs are met using the most up-to-date medical advances and technologies.

Lenzini’s career exhibits her sense of responsibility and devotion to service. After receiving her degree in nursing, she joined the U.S. Navy, serving in active duty 1968-1970, overseeing a 40-bed Marine ward at age twenty-two. Upon leaving the Navy, she joined the Groton Public Health Nursing Service, quickly moving into a management position, yet remaining patient-centered. She was an integral part of the team that pushed for a coordinated approach to community nursing in eastern CT, which led to the formation of what is now the VNASC. Lenzini served as its first president.

Lenzini’s commitment to serving the needs of eastern CT range beyond her career. She co-founded the soup kitchen at the Second Congregational Church in New London in 1987, which she still oversees. Furthermore, since 2006, Lenzini has served on the Board of Directors of the New London Homeless Hospitality Center, whose executive Director, Catherine Zall, was recognized by the Chamber as a William Crawford Distinguished Service Award recipient in November 2015.

Lenzini merges her personal passions and professional commitments when it comes to helping the less fortunate. She was instrumental in making VNA-affiliated nurses available to the clients at the New London Homeless Hospitality Center. These nurses have touched countless lives in eastern CT, connecting patients to primary care providers, running clinics, counseling diabetics, treating frostbite, giving flu shots, and dozens of other services that have made a significant impact in the health of our communities.

“Mary Lenzini is an outstanding individual who has dedicated herself to the well-being of the people of eastern CT,” said Tony Sheridan, President & CEO of the Chamber of Commerce of Eastern CT. “Her leadership encompasses the VNASC’s values of service, compassion, well-being, excellence, and accountability. Thousands of people, including schoolchildren, new mothers, and the elderly, have benefited from the good work performed by the VNASC under Mary’s oversight. She is truly a caretaker of our region. The Chamber looks forward to recognizing her for her work in May.”

“I am honored to be named the Eastern CT Citizen of the year,” said Lenzini, upon being notified of her selection. “I have been fortunate in my professional life and my personal life to be surrounded by wonderful people who have  brought joy and meaning to what I do every day.” 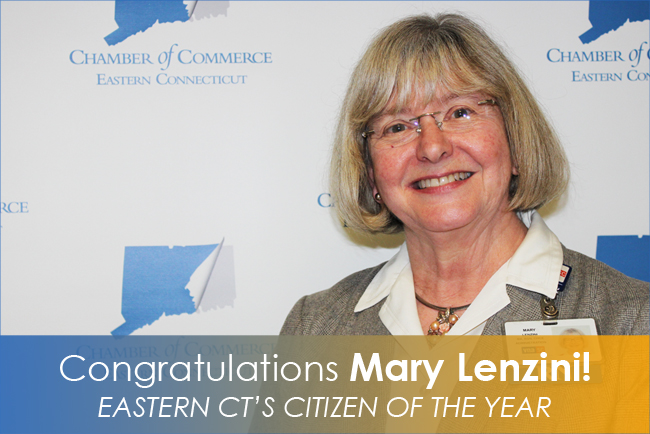 Recent past recipients of Citizen of the Year:

* * *
About the Chamber of Commerce of Eastern Connecticut:
The Chamber of Commerce of Eastern Connecticut is a collaborative of business and community leaders dedicated to securing and enhancing the economic vitality of eastern Connecticut. The Chamber works to create value for its members and the region by providing forums for business networking, leadership and discussions of issues that affect the region; providing opportunities for members to showcase their products, services and accomplishments; helping small businesses succeed through educational programs; and working to reduce the costs of doing business in Connecticut.  For more information, visit www.ChamberECT.com.