“Libraries are instrumental in helping promote literacy and educational opportunities for all members of our communities. We’re proud to do our part to provide the funding they need to continue to enrich learning in our neighborhoods,” said Merchant.

A grant of $2,000 was awarded to Slater Library of Jewett City to purchase and install three study/computer carrels in the children’s library, providing individual study space in a socially distanced environment. The Slater Library also received a $1,000 grant in response to their annual appeal. 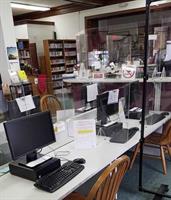