An Afternoon with Dr. Ruth on September 22 at the Garde

On September 22 at 2pm, enjoy a remarkable afternoon with the world's most famous sex therapist, Dr. Ruth Westheimer, as the launch of the Jewish Federation of Eastern Connecticut Annual Campaign. Dr. Ruth will advise the Garde audience and answer questions on issues concerning love, sex, and health, in no-nonsense and non-judgmental terms, all with a good dose of fun.

Dr. Ruth Westheimer is a Holocaust survivor who became America’s most famous sex therapist. With her diminutive frame, thick German accent, and uninhibited approach to sex therapy and education, Dr. Ruth transformed the conversation around sexuality. Now 91, she shows no signs of slowing down.

For information or to purchase tickets, contact the Garde Arts Center at 860-444-7373 or visit www.gardearts.org. The event is presented by the Jewish Federation of Eastern Connecticut.

What began in 1980 as a 15-minute taped show that aired Sundays after midnight in NYC, a year later grew to a live, one-hour showing airing at 10PM during which Dr. Ruth, as she became known, answered call-in questions from listeners.

Born in Germany in 1928, Dr. Westheimer was 10 years old when she was sent to a children’s home in Switzerland that served as an orphanage for most of the German Jewish students escaping the Holocaust. At 17, she went to Palestine where she fought for that country’s independence as a member of the Haganah, the Jewish Freedom Fighters. Dr. Ruth emigrated to the U.S. in 1956, where she obtained her master’s degree in Sociology from the Graduate School of the New School of Social Research.

In 1970, she received her Ed. D in the Interdisciplinary Study of the family from Columbia University. She worked for Planned Parenthood for a time, and it was that experience that prompted her to further her education in human sexuality by studying under Dr. Helen Singer Kaplan at New York Hospital-Cornell University Medical Center.

Dr. Westheimer never envisaged that one day she would use mass media to help spread what she has labeled “sexual literacy,” but Ask Dr. Ruth has been syndicated both nationally and international by King Features Entertainment, making her a household name in the U.S., London and Hong Kong. The All New Dr. Ruth Show brought her back to Lifetime, and with What’s Up, Dr. Ruth, she helped broaden Lifetime’s appeal with teens. There were also Dr. Ruth's Good Sex Night-to-Night Calendar (1993 & 1994) and a board/computer game, Dr. Ruth's Game of Good Sex. She also starred in a pilot for ABC titled Dr. Ruth's House and appeared in an episode of Quantum Leap, and more recently, on the Ellen Show.

She was the Executive Producer for PBS documentaries, Surviving Salvation and No Missing Link, The Olive and The Tree: The Secret Strength of the Druze, and Shifting Sands: Bedouin Women at the Crossroads. Her last documentary is on the Circassians, and the accompanying book is entitled The Unknown Face of Islam.

She's been featured on TV commercials for Clairol Herbal Essence, Honda, Pepsi, Entenmann's and many other products. She also narrated two children's stories, Little Red Riding Hood and Goldilocks and the Three Bears, on a CD entitled Timeless Tales And Music of Our Time, a project by An die Musik (Oboe, String trio & Piano) for Newport Classics records, which received a Grammy nomination.

Dr. Westheimer is the recipient of numerous awards and honors including an Honorary Doctorate from Hebrew Union College Institute of Religion, an Honorary Doctorate in Humane Letters from CUNY's Lehman College, the Ellis Island Medal of Honor, the International Society for Sexual and Impotence Research 20th Anniversary Award, and the Leo Baeck Medal.

She was awarded an honorary doctorate from Trinity College, Columbia University's Teacher's College Medal for Distinguished Services, and the Yale Mental Health Research Advocacy Award at the 2012 annual National Alliance for Mental Illness (NAMI) research advocacy symposium. She received the Margaret Sanger Award from Planned Parenthood and is a board member of Museum of Jewish Heritage: A Living Memorial to the Holocaust. She is currently serving as the Honorary President of the Council on Sexuality and Aging at the National Sexuality Resource Center.

She is the author of forty-one books--and counting. She has her own website, www.drruth.com and is active on Twitter @AskDrRuth. Currently, her life is the subject of a Hulu documentary, Ask Dr. Ruth. Dr. Westheimer has two children, four grandchildren and resides in New York City. 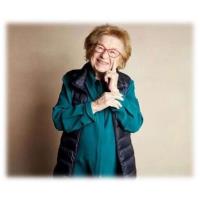