Tickets $15. Advance sales available on our website.
Cash, check, or credit accepted at the door. Age 18 and under admitted for free.

ALL seating is unreserved. Doors open 1/2 hour before start of event.

Since their move to Boston in 2001, the Heatons have become an integral part of Boston’s vibrant trad music scene. (Shannon co-founded the Boston Celtic Music Fest in 2003.)

Shannon was named 2016 Massachusetts Cultural Council Traditional Artist Fellow. The Irish American News dubbed her Female Musician of the Year (2009) and Live Ireland nominated her Female Musician of the Year 2010 and  2011. She's been compared to Alison Krauss and Altan's Mairéad Ní Mhaonaigh for her combination of vocal grace and instrumental prowess on Irish flute, whistles and accordion. She is also an acclaimed arranger and composer, and has published two instructional Irish music books.

In addition to his acclaimed work as an Irish accompanist on guitar and bouzouki, Matt has also received multiple Massachussetts Cultural Council Grants for his work with kids (he's got two CDs of original rockabilly-tinged music for children and discerning parents). He fronts surf-rock band Electric Heaters and also holds a master's degree in classical guitar. For his creative chording and driving grooves, Matt has been called "a combination of Bill Frisell and Arty McGlynn."

Matt and Shannon are poised, passionate American performers with Irish roots and universal appeal. They are comfortable onstage and have a warm connection with their audiences. They move listeners with their love of traditional music (and each other), and their sense of adventure and fun in exploring new directions and possibilities. 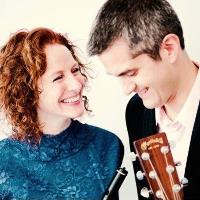