This October, the PinkSTYLE Program Returns to Raise Money and Awareness for Breast Cancer Research

Mashantucket, CT – Foxwoods® Resort Casino and Tanger Outlets will once again support the battle against breast cancer with the PinkSTYLE shopping campaign. Tanger has a history of making a difference in the communities it serves across the country and will not stop until the battle is won.  All proceeds from Pink Card sales at the Tanger Outlets at Foxwoods will be donated to the Breast Cancer Research Foundation and the L&M Waterford – Smilow Hospital Care Center.

From October 1 through October 31, Foxwoods guests can participate by purchasing Pink Cards for $10 that unlock 25% discounts throughout the property, including:

“Foxwoods is proud to be teaming up with Tanger Outlets again this fall for the 24th annual PinkSTYLE initiative and directly supporting those in need  within our community at The Smilow Cancer Hospital Care Center of Waterford, CT,” said Annette DeBois, Vice President of Guest Experience and Operations at Foxwoods Resort Casino. “At Foxwoods, no one fights alone and we look forward to hosting such a wonderful campaign that not only rewards our guests with great deals, but also saves lives by raising much-needed funds and awareness for breast cancer.”

Since 1994, Tanger Outlets locations across the country have raised more than $20 million to battle breast cancer, and plan to raise another $1 million this year.

To support PinkSTYLE, visit Shopper Services at the Tanger Outlets at Foxwoods in front of Steve Madden or the Foxwoods Grand Theater and Fox Theater Box Offices to purchase a Pink Card.  Digital versions of the card can also be purchased and downloaded to smartphones at tangeroutlets.com/foxwoods.
* * *
About Foxwoods Resort Casino
25 Years Proud: Since 1992, Foxwoods Resort Casino has offered guests The Wonder Of It All as the premier resort destination in the Northeast.  As the largest resort casino in North America, Foxwoods offers a vast array of gaming in seven casinos; AAA Four-Diamond hotels, restaurants from gourmet to quick service, world-renowned spas, award-winning golf, state-of-the-art theaters, exclusive retailers and free-to-play online casino games at FoxwoodsONLINE.com. Foxwoods is owned and operated by the Mashantucket Pequot Tribal Nation and was the first full-service casino built on tribal land, pioneering a nationwide movement that now includes more than 400 gaming properties owned and operated by over 200 tribes across the U.S. For more information on Foxwoods and the property’s 25th anniversary celebrations, visit foxwoods.com. 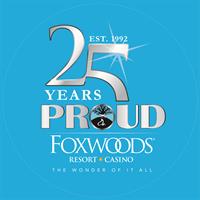