A group of commerce and tourism officials from Connecticut visited Ireland and England in mid-September 2017, completing a tourism trade mission aimed at attracting interest and visitors to our state. 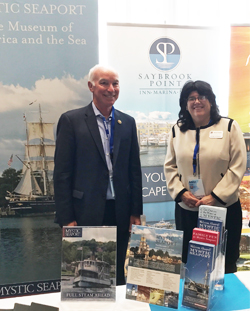 This special mission, called Tastes & Sights of Connecticut, succeeded in its directive to introduce representatives of Connecticut tourism and cultural attractions with tourism operators, travel agents and representatives from travel publications in Ireland and England. Those who attended the two events – first in Dublin, Ireland and then in Manchester, UK – were treated to a sampling of traditional Connecticut food, refreshments, and attractions.

The trip was organized by U.S. Department of Commerce and Connecticut tourism officials. Anne Evans, District Director for the U.S. Department of Commerce’s Commercial Services Division, U.S. Congressman Joe Courtney (D-2nd District), members of the Connecticut Office of Tourism, and Chamber of Commerce of Eastern CT President and CEO Tony Sheridan enjoyed meeting with attendees, including representatives of Irish, British, and American travel and tourism firms.

“This was a wonderfully productive trade mission. Tourism partners from all over Connecticut, especially eastern Connecticut, had the opportunity to meet with tour operators, travel agents and press in Dublin and England,” said Courtney. “In addition, we had the opportunity to meet with advanced manufacturers, including Doncasters, an England based aerospace manufacturer that operates a facility right in Groton.”

Sheridan credited the hard work of Evans and Courtney, along with the Connecticut Office of Tourism, with making this unique trade mission a success. “We’ve had great turnout with a large number of tourism officials and operators,” Sheridan said. “We expect positive results.”

He also thanked the airline Aer Lingus, which reintroduced international flights from Bradley International Airport to Dublin last year. “Aer Lingus decorated the room for us in Dublin, and it was a very positive, very classy presentation,” he said.

The emphasis was Connecticut-wide, with plenty of attention on promoting the eastern coastal region and “quaint small-town Americana.” The events were a chance to introduce Europeans to the high quality attractions and sumptuous cuisine that is identified with Connecticut. In addition to destinations, Sheridan said they were able to promote “the sandy beaches and shorelines that make our region a unique travel destination.”

“We have received a lot of positive feedback, and the presentations have been well received from individuals and organizations that coordinate travel to the United States,” he added. “We are looking forward to seeing the many connections we have made when they visit us back home in Connecticut.”

> View a video of the Connecticut booth at the Dublin event.