Eastern CT  – The Chamber of Commerce of Eastern Connecticut has announced that Reverend Michel Belt and Reverend Catherine Zall have been selected as the recipients of this year’s William Crawford Distinguished Service Award. They will be honored together at a joint celebration held the evening of Thursday, November 12, 2015 at Foxwoods Resort Casino.

The William Crawford Distinguished Service Award is periodically presented to outstanding individuals who exemplify the spirit of service to one’s neighbors, and who have contributed to improving the quality of life in eastern Connecticut. The award is named for William Crawford, General Manager of Southeastern CT Broadcast Corporation, who became well-known for generating community interest through his station’s programming.

Reverends Michel Belt and Catherine Zall were selected because of their compassionate work providing shelter and guidance to the region’s homeless. Belt, the recently-retired former Rector of St. James Episcopal Church of New London, converted the Church’s parish hall to a 50-bed temporary homeless shelter from 2006 to 2013, despite public pressure and criticism. He continues to strongly advocate on behalf of the region’s homeless population.

Zall, Pastor of the First Congregational Church and Executive Director of New London Homeless Hospitality Center, is equally dedicated to improving the lives of the less fortunate. Under Zall’s direction, New London Homeless Hospitality Center has provided a space safe for countless dispossessed people. The Center supports veterans and helps develop housing options for those who need them most.

Together, Belt and Zall organized and raised funds to purchase and convert the former St. Peter & Paul Polish National Catholic Church into a homeless shelter and support facility. Its residents are given a mailing address, are counseled on finding a job and permanent home, and are provided are provided a secure, dignified respite from the elements.

“These two individuals represent the ideals of the Crawford Award,” said Tony Sheridan, President & CEO of the Chamber of Commerce of Eastern Connecticut. “They have gone above and beyond the call of duty in taking care of those less fortunate than themselves. Michel and Cathy have turned countless lives around, and they have helped relieve the suffering of our area’s most destitute. Together, they have expressed the compassion of our region. They make all of us proud to live in eastern Connecticut. The Chamber is honored to thank them for their hard work.”

Bill Stanley, Vice President of Development and Community Relations for Lawrence + Memorial Hospital and Chair of the Chamber’s Crawford Award Nomination Committee agreed, noting, “Michel and Cathy have dedicated most of their waking hours in recent years to providing comfort, shelter, and guidance to the region’s homeless. Equally important, they have provided the homeless with a sense of dignity, respect, and hope as well. Without their version, courage, dedication, and hard work, it is safe to say many homeless would have died from exposure, and many more would still be trying to find their way back from homelessness.”

The Chamber of Commerce will recognize Belt and Zall for their accomplishments at a banquet dinner on November 12 at Foxwoods Resort Casino. The public is invited to help celebrate the immense amount of good these two individuals have accomplished for eastern Connecticut with a reception which begins at 6:00 p.m., and remarks and dinner commencing at 7:00 p.m.

Previous Crawford Award recipients include Dr. Stephen Coan of Mystic Aquarium & Sea Research Foundation; Jeanne and Steve Sigel of New London’s Garde Arts Center; Ulysses B. Hammond, former Vice President for Administration at Connecticut College; Dr. Raymond Johnson, former Senior Associate Director of Clinical Research at Pfizer; and Three Rivers Community College President Mary Ellen Jukoski.
* * *
About the Chamber of Commerce of Eastern Connecticut:
The Chamber of Commerce of Eastern Connecticut is a collaborative of business and community leaders dedicated to securing and enhancing the economic vitality of eastern Connecticut. The Chamber works to create value for its members and the region by providing forums for business networking, leadership and discussions of issues that affect the region; providing opportunities for members to showcase their products, services and accomplishments; helping small businesses succeed through educational programs; and working to reduce the costs of doing business in Connecticut.  For more information, visit www.ChamberECT.com. 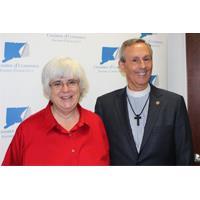