Both retain their roles as senior vice presidents of the system.

At Backus Hospital he served as vice president for communications and then strategy before being named president and chief executive officer in 2009. Backus became a member of Hartford HealthCare in 2012.

At Windham Hospital, Whitehead has created a comprehensive cornerstone care model to transform Windham Hospital, and he will continue to be actively involved and responsible for the implementation of that model in his new role.

Whitehead has also led HHC’s successful strategic growth, with a focus on outpatient services and building a strong ambulatory network. He has been actively involved in leadership positions on a variety of civic and community organizations.

“I very much look forward to my new role,” Whitehead said. “It connects three areas of healthcare I feel passionate about: strategy, communications and transformation.”

He replaces James Blazar, who has accepted a leadership position at Hackensack University Medical Center in New Jersey.

Patel, who has been part of HHC’s team for seven years, has had wide-ranging professional experience.  Trained as a pharmacist, he has worked for Cardinal Health and later served in various leadership roles for clinical ancillary, professional and support services for the Guthrie Health System at Robert Packer Hospital in Pennsylvania, which was named a Truven Top 100 hospital.

Patel has led major system initiatives, including HHC 2020, an infrastructure master plan; and worked closely with physicians and other stakeholders on the major expansion of the Center for Education, Simulation and Innovation (CESI) and the development of the Bone & Joint Institute. Patel has worked closely with all of HHC’s clinical councils, and was responsible for the operations of HHC’s support services.

“This is a great opportunity, and I look forward to being part of the East Region team,” Patel said. “I have had the pleasure of working with many Backus and Windham Hospital staff members, and I believe the future is bright for healthcare in eastern Connecticut.”

“Both of these senior vice presidents have proven track records of success,” said Jeffrey Flaks, executive vice president and chief operating officer of Hartford HealthCare. “They have demonstrated the ability to think strategically and execute complex plans carefully. Most importantly, both have shown time and again that their core values are solidly aligned with those of our organization.” 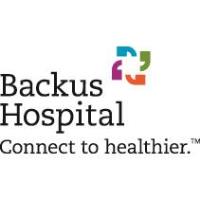