Three lawyers from Suisman Shapiro Attorneys at Law were again selected by their peers for inclusion in the 22nd Edition of The Best Lawyers in America® 2016. Matthew E. Auger was selected in the practice area of Medical Malpractice Law; John A. Collins, III in the field of Personal Injury Litigation; and Matthew Shafner in the area of Workers’ Compensation Law.

Since it was first published in 1983, Best Lawyers® has become universally regarded as the definitive guide to legal excellence. Best Lawyers is based on an exhaustive peer-review survey.  Over 55,000 leading attorneys cast more than 6.7 million votes on the legal abilities of other lawyers in their practice areas. Best Lawyers first international list was published in 2006 and since then has grown to provide lists in over 65 countries. Lawyers are not required or allowed to pay a fee to be listed; therefore inclusion in Best Lawyers is considered a singular honor.

"Best Lawyers is the most effective tool in identifying critical legal expertise," said CEO Steven Naifeh. "Inclusion on this list shows that an attorney is respected by his or her peers for professional success."

John A. Collins, III has successfully obtained verdicts or public settlements up to $10 million on behalf of injured victims over a 29-year law practice.  He currently serves as the Managing Partner of Suisman Shapiro.  The Connecticut Bar Foundation honored Attorney John A. Collins, III, in 2005 with his selection as a Life Fellow.  "Selection as a Fellow requires demonstrated superior legal ability and devotion to the welfare of the community, state and nation, as well as to the advancement of the legal foundation".  Source: Connecticut Bar Foundation.

Matthew Shafner is a nationally recognized lawyer in the fields of asbestos injury, personal injury, maritime injury and workers compensation. He was admitted to practice in Connecticut, the Federal Courts of Appeals in the 1st and 2nd Circuits and the U.S. Supreme Court.  His reported decisions have been published by the Appellate Court, Supreme Court, and the U.S. Court of Appeals in the 1st and 2nd Circuits.  Attorney Shafner is a member of the Million Dollar Advocate Forum.  In 2015, Best Lawyers recognized Matthew Shafner as “Lawyer of the Year.” He is only the ninth person ever to receive the Connecticut Trial Lawyers Association's lifetime achievement award since the association formed in 1954. 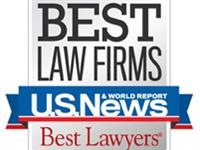