The Heart & Soul of Russia


We often think of Russian pianism as being virtuosic. Russian Late Romantic music does require ferocious technical mastery, but the heart of this celebrated style is its deep lyricism. Among Russian performers gracing the American concert stage today, there is no more poetic a figure than Olga Vinokur. Her passionate commitment to the rich, subtle scores of Rachmaninoff, Medtner, and Scriabin is justifiably famous. She also brings a depth and finely chiseled intellect to early moderns like Prokofiev that takes your breath away. Join us for a rare pianistic and artistic encounter, a true revelation. Wine reception to follow.

About Olga Vinokur
​Olga Vinokur is an acclaimed pianist and a dynamic performer on the classical and contemporary music scene who is gaining recognition for “the strength and consistency of her artistry” as noted by NYTimes.
She has appeared in US and internationally as recitalist, with orchestra and chamber musician in major venues including Carnegie Hall, Alice Tully Hall, Bargemusic, Merkin Hall, Town Hall in New York, Shangai Oriental Art Center in Shangai, Rudolfinum’s Dvorak Hall and Municipal House’s Smetana Hall in Prague, King’s Place in London, among many others.
[Picture]

Ms. Vinokur participated in Tel-Hai International Piano Master-classes in Israel where she was awarded a prize in honor of Ada Caspi.  She is a frequent performer at Bargemusic in New York where she played solo recitals and chamber concerts, which included the world premiers.​​

Ms. Vinokur is presented in the film documentary “Women of Music”, a classical music series on Bravo TV station in Canada, which features interviews and performances with today’s top classical performers from around the world. She has been heard on WNYC’s “Soundcheck” in New York, BBC in London, IMFChicago, the Israeli “Voice of Music” radio station, Czech National Radio, Dutch radio, National radio of France and Switzerland, Russian National Public Radio among others. She has been a recipient of numerous awards and prizes.

She has appeared as a soloist with Prague Philharmonic and Moravian Philharmonic Orchestra of Czech Republic, Lambeth Symphony of London, Prague Castle Guard Orchestra, Salome Chamber Orchestra, La Primavera Chamber Orchestra of Russia, Manhattan Symphony and others. Ms Vinokur has toured in China as a soloist with Manhattan Symphonee Orchestra where she performed in major concert halls of 11 different cities. American Record Guide described her solo CD as “comparisons with many of top pianists of the past 75 years. She stands up very well and also manages to say something new along the way...” New York Times has described her playing as “an exquisite performance” and BBC magazine called Olga “superlative.”

An avid chamber musician, she has performed with distinguished St. Petersburg, Martinu, Nightingale, Aeolus, Primo quartets among others. Dedicated to new projects, Olga Vinokur is committed to performing the music of today. Known for adventurous and imaginative programming, she has premiered solo and chamber works collaborating with both established and emerging composers. “She knows just how to handle composers who surf the line between a Romantic sensibility and a modern sound” wrote New York Times. Recently Olga has recorded Taneyev Quintets CD with distinguished Martinu quartet on Supraphone Record, which was highly acclaimed.

A native of Russia, Olga Vinokur began her piano studies at the age of six, and at twelve was awarded First Prize in the National Young Artist Piano Competition in Russia. Since then she has been a recipient of numerous awards and prizes, including First-Prize in the Prokofiev Piano Competition in Russia and major prizes in the Torrefranka International Piano Competition in Italy, the Koussevitzky Piano Competition and Artist International in New York, and the Rubin Academy Competition in Israel among others. She has been an annual scholarship recipient of America-Israel Cultural Foundation.
Olga Vinokur began her studies in Russia. Moving to Israel, she received her Bachelor’s Degree and Artist’s Diploma with honors from the Rubin Academy of Music in Tel-Aviv University where she studied with Victor Derevianko and Natasha Tadson. She pursued her Master and Doctor of Musical Art Degrees at the Manhattan School of Music in New York where she studied with Salomon Mikowsky. Olga Vinokur resides in New York. 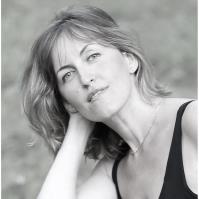