Plimoth Plantation announced today it will officially launch Mayflower II, the acclaimed living history museum’s historic tall ship, on Saturday, September 7, 2019 at Mystic Seaport Museum’s Henry B. duPont Preservation Shipyard. The ceremony, which begins at 2:00 p.m., includes performances, remarks, and the ship’s christening with water from all fifty states as well as Plymouth, U.K. and Leiden, Netherlands, before Mayflower II is lowered into the Mystic River to float for the first time in three years. Once she returns to Massachusetts in spring 2020, the ship will be the centerpiece of the 400th commemoration of the Pilgrims’ arrival to historic Patuxet, now known as Plymouth.

“Launching Mayflower is an incredibly exciting and significant restoration milestone,” said Ellie Donovan, Plimoth Plantation’s Executive Director. “Our dedicated maritime staff have been working diligently alongside the talented team from Mystic Seaport Museum for nearly three years to make one of the world’s most iconic ships seaworthy again. We look forward to celebrating her return to the water and welcoming visitors on board next year.”

Designed by MIT-trained naval architect William Avery Baker for Plimoth Plantation, Mayflower II is a full-scale reproduction of the ship the Pilgrims arrived on in 1620.  Built in the mid-1950s in Brixham, England, the ship was intended as a gift to the people of America from the people of England to honor the bonds of friendship formed during World War II. She arrived in Plymouth on June 13, 1957 to great fanfare and 25,000 spectators, and since that time has been a major exhibit of Plimoth Plantation. Millions of visitors have crossed her decks to learn about the Pilgrims’ historic journey and 17th-century maritime life.

The centerpiece of Plimoth Plantation’s $20 million fundraising campaign, the ship has been undergoing a full restoration at Mystic Seaport Museum since November 2016. Despite excellent care over six decades under Plimoth Plantation’s stewardship, the ship had submitted to the deterioration process expected of any organic material exposed to natural elements. Nearly 70% of the ship’s timbers, planking, structural frames, knees, and beams have been replaced, using six types of wood from eight states and as far away as Denmark.

“We are very proud to have contributed our knowledge and expertise of the restoration of historic vessels to enable the ship to participate in the commemoration of the 400th anniversary of the Pilgrims’ arrival in 1620,” said Steve White, President, Mystic Seaport Museum. “This partnership is an example of how two museums can successfully collaborate to achieve a complex project within tight time constraints.”

As previously announced, following the launch, Mayflower II will spend the winter at Mystic Seaport Museum preparing for a May 2020 departure. The newly restored ship will make her debut in Boston from May 14 – 19, 2020 for Mayflower Sails 2020, a free maritime festival at the Charlestown Navy Yard (details at www.mayflowersails2020.com), followed by her long-awaited homecoming to Plymouth, Massachusetts on May 21, 2020.

Official Launch Ceremony: Program and How to Attend
The launch ceremony will take place at the Henry B. duPont Preservation Shipyard at Mystic Seaport Museum from 2 p.m. to 3:30 p.m. on Saturday, September 7th. The public is invited to attend this event with admission to Mystic Seaport Museum, which will be open from 9 a.m. to 5 p.m. as usual. To purchase general admission tickets to the museum, please visit www.mysticseaport.org. Admission is free for Mystic Seaport Museum members. Plimoth Plantation members will receive information about admission options. Please note that lawn chairs, blankets, coolers, and large bags will not be permitted. A very limited number of seats will be available in the shipyard for purchase through special event ticket sales at www.sailingmayflower.org.

Upcoming MAYFLOWER Events
In addition to the ship’s official launch, Plimoth Plantation invites the public to attend several other related events in the coming months, including:

Visit www.sailingmayflower.org and follow along with @officialmayflower on social media to view restoration videos, and stay up-to-date on progress and plans!

About Plimoth Plantation
Through powerful personal experiences, Plimoth Plantation tells the stories of the Wampanoag people and the English colonists who created a new society – in collaboration and in conflict – in the 1600s. Major exhibits include Mayflower, a Wampanoag Homesite, a 17th-Century English Village, and the Plimoth Grist Mill. Located less than an hour’s drive south of Boston, and 15 minutes north of Cape Cod, the Museum is open daily from 9 a.m. to 5 p.m., 7 days a week, from mid-March through the end of November. A private, 501(c)(3) not-for-profit educational institution, the Museum is supported by admission fees, contributions, memberships, and revenue from a variety of dining programs, special events and gift shops. Plimoth Plantation is a Smithsonian Institution Affiliate and receives support from the Massachusetts Cultural Council, private foundations, corporations, and local businesses. For more information, visit www.plimoth.org. Follow Plimoth Plantation on Facebook, Instagram, and Twitter and Mayflower II on Facebook and Instagram.

About Mystic Seaport Museum
Mystic Seaport Museum, founded in 1929, is the nation’s leading maritime museum. In addition to providing a multitude of immersive experiences, the Museum also houses a collection of more than two million artifacts that include more than 500 historic vessels and one of the largest collections of maritime photography. The new Thompson Exhibition Building houses a state-of-the-art gallery that will feature J.M.W. Turner: Watercolors from Tate, the most comprehensive exhibition of Turner watercolors ever displayed in the U.S. opening October 5, 2019. Mystic Seaport Museum is located one mile south of Exit 90 off I-95 in Mystic, CT. For more information, please visit www.mysticseaport.org and follow Mystic Seaport Museum on Facebook, Twitter, YouTube, and Instagram. 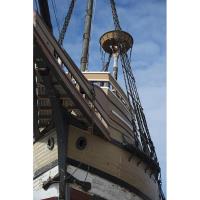